There are three ways to stretch in a posture:

Passive stretching involves very little effort and uses the weight of your body along with gravity to tug on your connective tissue. For example, a standing forward bend with the arms folded. One could adopt this posture and hang there. This kind of stretching is relatively ineffective as it takes a long time to produce results.

This type of stretching has the added disadvantage of not protecting the muscle stretched, if in the posture previously described we bend over and dangle, in this case the stretch would mainly be taken at the origin of the hamstring muscles. This can result tearing of muscle fibres, the so-called "pulled hamstrings". Another downside of Passive stretching is that it does not build strength to support the flexibility gained.

Active stretching is the technique employed in Ashtanga Yoga. In this type of stretching we utilise an inherent reflex, called reciprocal inhibition, without which the body could not move. Whenever a muscle contracts, its antagonist (the muscle with the opposite function) releases. To understand this reflex one may look at the elbow joint. When the biceps contracts, the triceps releases, so that the elbow may be flexed. If the triceps also contracted, the elbow could not move. Likewise, when the triceps contracts, the nervous system simultaneously sends a signal to the biceps to release, and the elbow is extended. 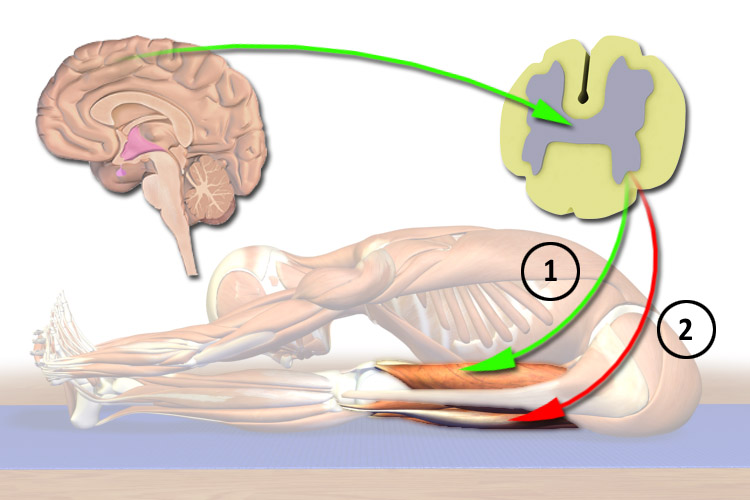 Dynamic stretching is the other form of stretching and is mainly used in sports, martial arts, and rhythmic gymnastics. Here one uses momentum to stretch. It is not often employed in yoga as it is considered forceful, but there are some exceptions in certain poses.