We have learned about the importance of deep breathing. What is it exactly that makes yogic breathing so effective?

To answer this we have to look at the idea of prana. Sometimes called chi, prana can refer to the anatomical breath, but it most often denotes life force, located in the subtle body. It is important to understand that the two are not identical.

The movements of the life force that occur in the subtle or energetic body have some correlation to the movement of breath in the gross body. The flow of prana can be influenced by directing one’s breath.

It can even be accumulated and stored. Most of us have heard accounts of yogis who managed to survive without oxygen for extended periods of time. Although it is not the purpose of yoga to perform such feats, it is nevertheless possible using a combination of posture, breath and bandha, and they produce the sealing of prana.

It is this process of gaining control of the life force that differentiates yogic exercise from mere gymnastics. Gymnastics and sport can make one fit, but they don’t have the energy-preserving effect of yoga. It is the combination of posture with pranayama and bandha that makes yoga so effective.

The term bandha is related to the English word ‘bonding’. We bond breath, movement and awareness together. 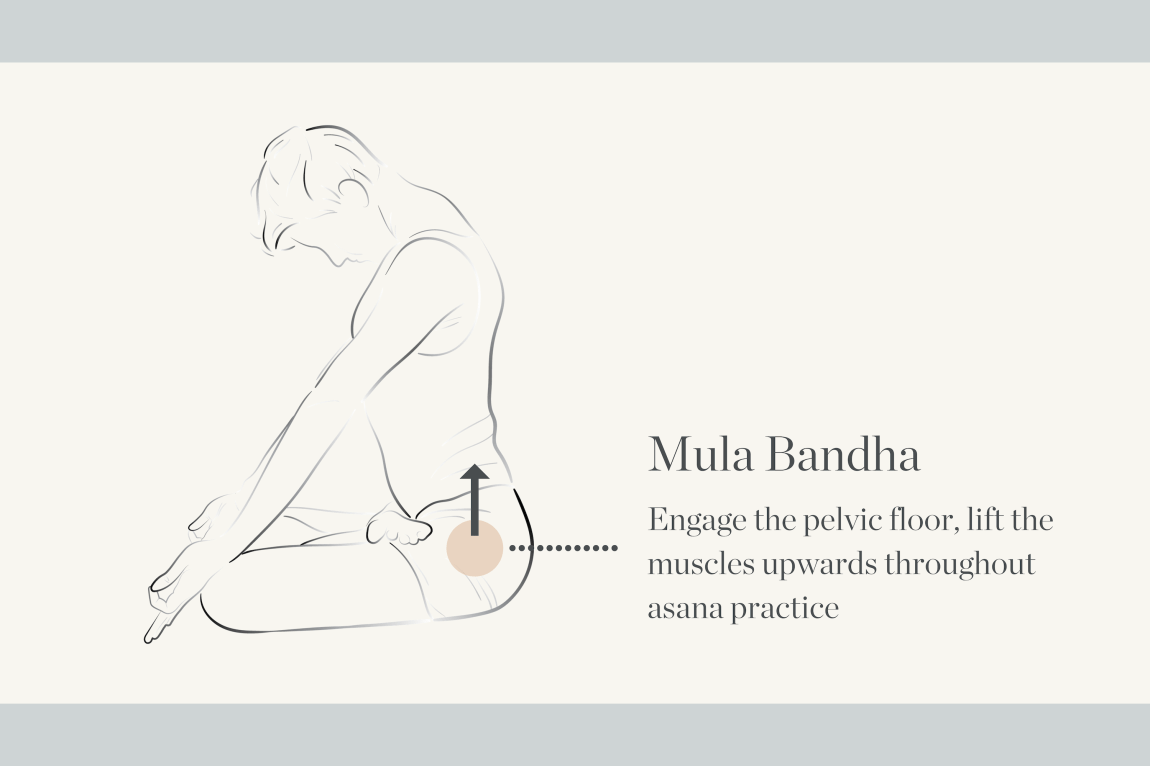 Mula is the first bandha, which translates as ‘root lock’. The root referred to here is the root of the spine, the pelvic floor or, more precisely, the centre of the pelvic floor, the perineum. The perineum is the muscular body between the anus and the genitals. By slightly contracting the pubo-coccygeal (PC) muscle, which goes from the pubic bone to the tail bone (coccyx), we create an energetic seal that locks prana into the body and so prevents it from leaking out at the base of the spine. Mula Bandha is said to move prana into the central channel, called sushumna, which is the subtle equivalent of the spine.

Locating the PC muscle might be difficult at first. It has been suggested that one should tighten the anus, or alternatively contract the muscle that one Would use to stop urination, but these indications an not entirely accurate: Mula Bandha is neither of these two muscles but located right between them. These suggestions have their value, however, offering some guidance until we become more sensitive and are able to isolate the PC muscle more precisely. 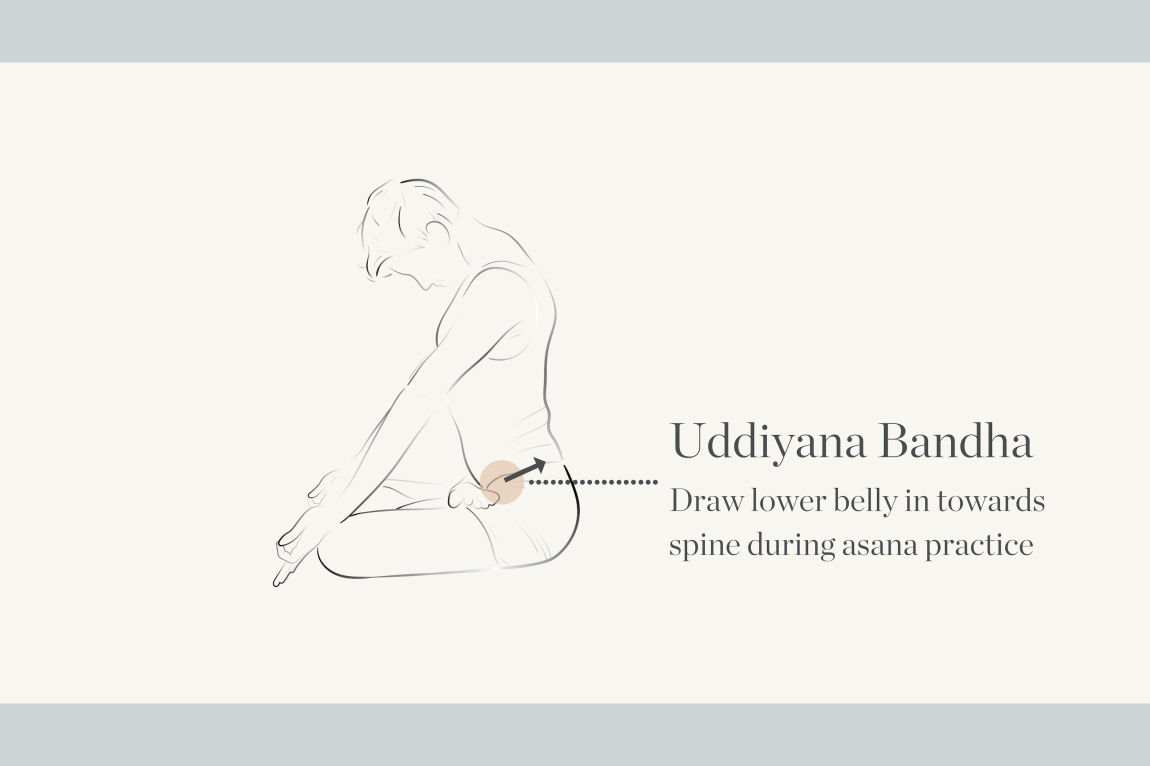 Uddiyana is the second bandha, and it is practiced by drawing the abdominal contents up into towards the thoracic cavity. To successfully switch on uddiyana bandha, it is important to isolate the upper abdominal muscles from the lower part and use only the part below the navel. Doing otherwise impinges on the free movement of the diaphragm. If the movement
of the diaphragm is restricted for a long time, boastful, egotistical and macho-like tendencies can develop in the psyche.

There was a great man, Adi Shankara, in the 8th century who reformed Indian spirituality, having seen how ritualistic it had become. In his 32 years of life he wrote dozens of treatises on various aspects of metaphysical knowledge.

True posture, according to Shankara, is that which leads effortlessly to meditation on the all-pervasive pure consciousness, and not to pain and self-torture. Patanjali says that asana is perfected when meditation on the infinite is achieved through the releasing of excess effort. Those who have had a true experience of the practice will have come away feeling happy.

A lot of emphasis has been placed on abdominal breathing in our culture in the last forty years. This has its place in the performing arts - especially dance and theatre - and for therapy. It is certainly helpful for singers and actors, and for someone undergoing psychotherapy. Abdominal breathing, with complete relaxation of the abdominal wall, is recommended as useful whenever we want to connect to our emotions and bring them to the fore. Abdominal breathing is a good idea whenever one wants to intensify one’s emotions. In many other situations, though, it is not helpful to heighten one’s emotions.

Besides the fact that it makes one emotional, constant abdominal breathing also has negative physical repercussions. It leads to sagging, collapsing abdominal organs with enlarged, weak blood vessels and stagnant blood. Then follows a lack of oxygen supply, a decrease in vitality and eventually the development of chronic disease.

If the lower abdominal wall is kept firm and the upper wall is relaxed, the diaphragm moves up and down freely and the whole abdomen functions like the combustion chamber of an engine, with the diaphragm as the piston. This produces a strong oscillation of intra-abdominal blood pressure, and it is exactly this mechanism that produces healthy abdominal organs. 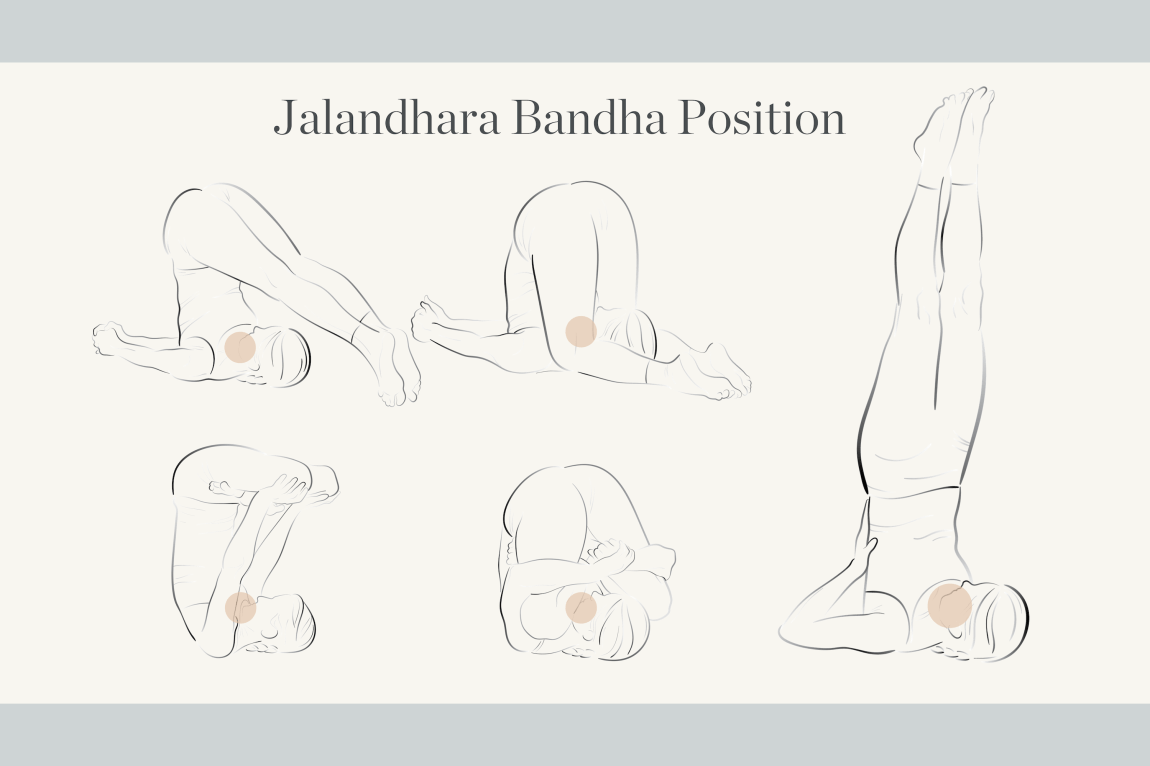 Jalandhara Bandha is the third major bandha and technically is used only during pranayama and meditation techniques, although the general position is employed in various poses.

Do do the full bandha you would sit in a meditation posture, lift the chest, extend the neck and then place the chin as low down as you can on the sternum. Then you would “lock the throat”, which basically means swallow and keep the throat muscles gripped, so that no air can pass in or out.

It is an important energetic seal. 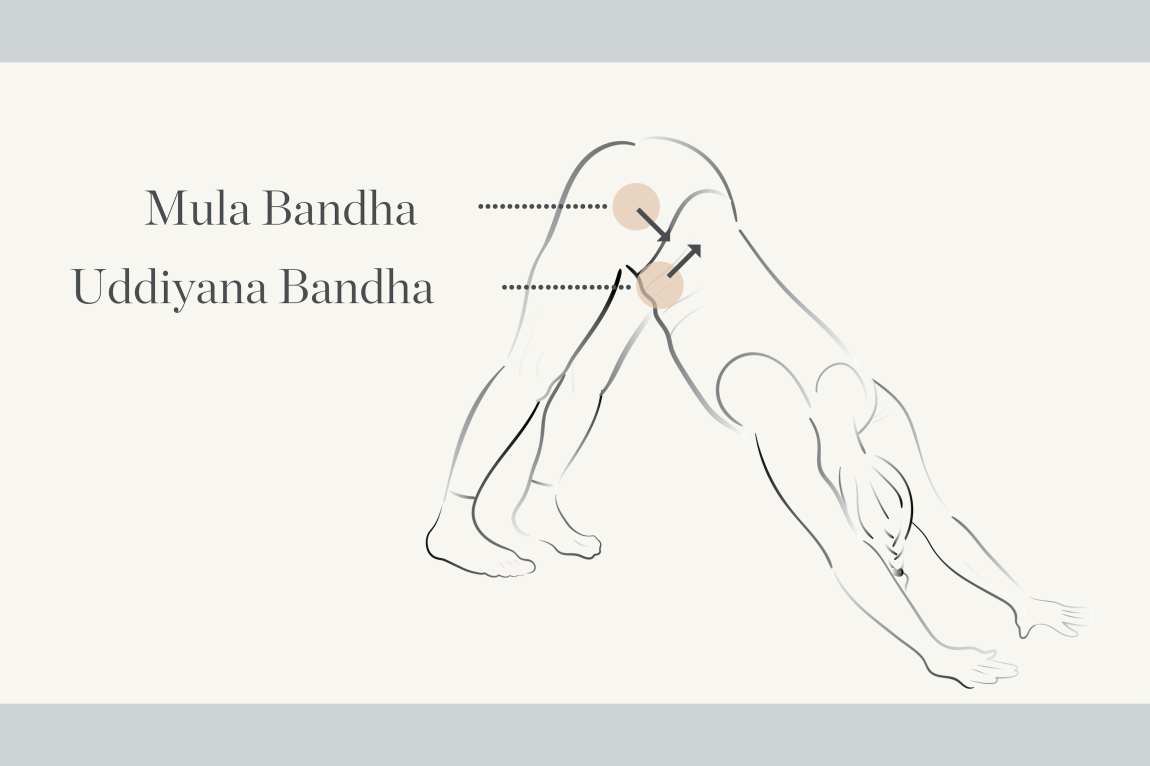 Stringing them all together in downward facing dog, you would apply mula bandha and uddiyana bandha and also tuck the chin in a mild version of jalandhara bandha.

There are many more poses and applications of bandha, and you will learn them gradually.